This website keeps you up-to-date with the latest info about Xirene.

Xirene is a X-482 yacht owned by David de Graaf. He will sail her around the world, starting november 2013. 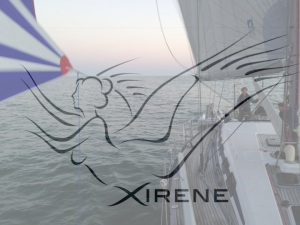 Xirene is derived from Siren (or in Dutch: Sirene), the dangerous and beautiful female creatures in Greek mythology. It does NOT stand for:

Sirene/ Sirenje (Bulgarian: сирене, pronounced [ˈsirɛnɛ]; Macedonian: сирење, pronounced [ˈsireɲe]; Serbian/Croatian: сир, sir, Albanian: djath i bardhe) or known as “white brine sirene” (Bulgarian: бяло саламурено сирене, [ˈsirɛnɛ]; is a type of brine cheese made in South-Eastern Europe, especially popular in Serbia, Bulgaria, the Republic of Macedonia and other Balkan countries. It is made of goat milk, cow‘s milk, sheep milk or a combination of milks. It is slightly crumbly with a fat content of about 30–35%. It is commonly produced in blocks, and has a slightly grainy texture. It is used as a table cheese, as well as in salads and in baking.

And it has nothing to do with Appel, Peer or PACHA ! Nor with the 1009 Sirene,  a Mars-crosser asteroid. 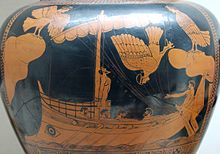 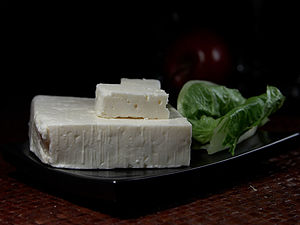 Odysseus fight with the Sirens and Greek feta

In Greek mythology, the Sirens (Greek singular: Σειρήν Seirēn; Greek plural: Σειρῆνες Seirēnes) were dangerous and beautiful creatures, portrayed as femmes fatales who lured nearby sailors with their enchanting music and voices to shipwreck on the rocky coast of their island. Roman poets placed them on some small islands called Sirenum scopuli. In some later, rationalized traditions, the literal geography of the “flowery” island of Anthemoessa, or Anthemusa,[1] is fixed: sometimes on Cape Pelorum and at others in the islands known as the Sirenuse, near Paestum, or in Capreae.[2] All such locations were surrounded by cliffs and rocks.